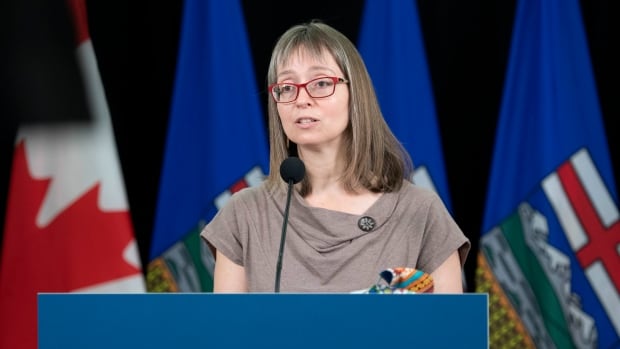 After a weekend of record-setting variant cases in the province, including the first two cases of a strain first identified in Brazil, Alberta’s chief medical officer of health will provide another update on COVID-19 Monday.

The number of variants of concern shot up over the weekend, setting a single-day record on Saturday when the province reported 70 new cases of the B117 variant, first identified in the United Kingdom.

While that variant was limited to under 20 cases for a month after it was detected in Alberta back in late December, cases have increased four-fold in the past month to 902 as of Sunday.

Adding the B1351 variant first identified in South Africa, Alberta had identified a total of 920 cases of the three variants of concern as of Sunday.

Across the province, 248 people were being treated for COVID-19 in hospital Sunday, including 38 in intensive care. Active cases stood at 4,697.

Hinshaw is expected to address questions about the vaccine program Monday, as the province looks to incrementally roll out doses to all Albertans born 65 and older as part of what it calls Phase 2A.

The rollout will continue by birth year over the coming days, one year at a time.

Alberta Health Services reported “intermittent issues” with its online booking tool Monday, it said on Twitter. Those eligible can still book an appointment through a participating pharmacy or by calling 811.

The AHS website is experiencing intermittent issues. The Covid-19 immunization booking tool launch this morning is being delayed as a result. We are working to resolve the issue quickly.

More than 92 per cent of the province’s current supply of AstraZeneca-Oxford vaccine doses had been booked as of Sunday afternoon, Hinshaw said.

Given the dwindling supply, the province shut down online bookings, with limited appointments available only through Health Link 811. First Nations, Inuit and Métis people born between 1972 and 1976 are eligible, as are other Albertans born between 1957 and 1961.

Health-care workers had administered 357,983 doses of vaccine as of Sunday’s update.

Alberta Health Services announced Monday that a large-scale COVID-19 vaccination site will open April 5 at the Calgary Telus Convention Centre. The site will operate seven days a week, between eight and 16 hours a day. Booking is expected to open later in March.