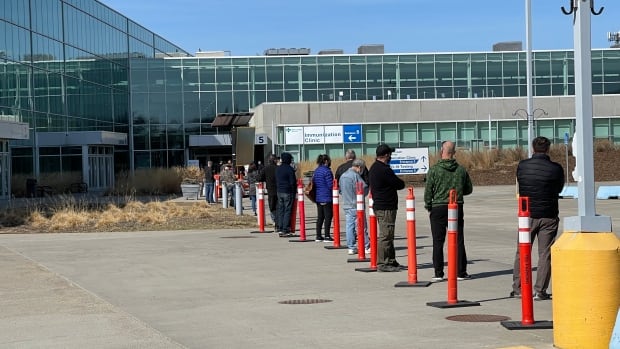 Thousands more Albertans are rushing to roll up their sleeves to get vaccinated against COVID-19 as the province lowers the age of eligibility for the AstraZeneca-Oxford shot.

More appointments were made for AstraZeneca in the span of two and half hours on Tuesday than during all of last week, Alberta Health Services said in a statement.

People born in 1981 or earlier became eligible to make appointments at 8 a.m. More than 9,000 people were already in the queue when the online booking site went live, AHS said. By 10:30 a.m., more than 27,000 people had booked appointments.

“Uptake for the AstraZeneca vaccine has been significantly higher this morning,” AHS spokesperson Kerry Williamson in an email.

Eligible Albertans can book through the online site, or by calling 811. The shots are also being offered at select pharmacies and large vaccinations centres established by Alberta Health.

During the first hours of booking Tuesday, about 6,500 appointments were made in the Edmonton health zone and another 15,000 were booked in the Calgary zone.

“This is a higher uptake in one morning than over the entirety of last week,” Williamson wrote.

AstraZeneca is the only vaccine Alberta is making available to people as young as 40. The province lowered the eligibility age from 55 on Sunday based on new Health Canada rules.

Lowering the age made 575,000 more Albertans eligible for the shots. As of Sunday, Alberta had about 170,000 doses of AstraZeneca available.

Dr. Deena Hinshaw, Alberta’s chief medical officer of health, was among those to get the shot . She shared a photograph of herself on Twitter.

“I am proud today to be among the Albertans now eligible to receive the AstraZeneca vaccine,” Hinshaw wrote. “I am protecting myself, my family & my community.”

I am proud today to be among the Albertans now eligible to receive the AstraZeneca vaccine. By choosing to be immunized, I am protecting myself, my family &amp; my community. AZ remains a smart choice if you are 40+ &amp; not part of phase 2B/C so you can get your vaccine quickly. (1/3) <a href=”https://t.co/Fq08FitAlW”>pic.twitter.com/Fq08FitAlW</a>

The vaccine is being offered at more than 70 pharmacies and AHS vaccination sites across the province, including two walk-in clinics.

There were long lines outside the Edmonton Expo Centre and Telus Convention Centre sites in Edmonton and Calgary. Due to high demand, hundreds of additional slots were opened up, hours after the clinics opened.

Appointments at both sites are fully booked for Tuesday. There are some walk-in spots available but AHS said it would honour those who are already waiting in line.

About 3,000 Albertans booked at the Telus site and about 590 people are booked to get the jab at Expo.

Appointments will be booked for as long as vaccine supplies last.

No additional AstraZeneca shipments are currently scheduled to arrive in Canada, Alberta Health, said in a statement Tuesday.

Kamran Maqbool, the owner of Grandview Pharmacy in Edmonton said his phone had been ringing off the hook.

Less than an hour after opening his doors, more than 30 appointments had been made and a long queue of hopeful walk-ins had formed outside, Maqbool said.

He said it’s the biggest rush for appointments he’s seen.

“It’s very busy and the response is very positive. Canadians are very well educated on the vaccine,” he said.

Maqbool said the constantly shifting guidelines around AstraZenca had created some confusion during the initial rollout and limited supply remains a concern.

He said the pharmacy has about 200 more doses of the shot remaining and has no idea when the next batch will arrive.

“We want to try our best to get it out to the community.

“Hope for the best that you can get it soon.”

As of Sunday, 1,165,223 doses of COVID vaccine had been administered across the province, with 233,340 Albertans fully immunized.