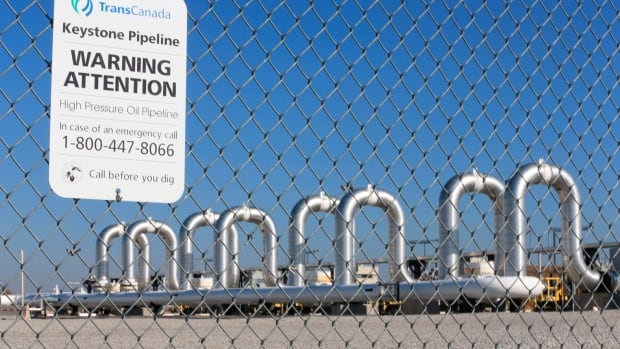 TC Energy Corp. gave the go-ahead Tuesday for construction of its $8-billion US Keystone XL pipeline project, with help from the Alberta government.

The company said Alberta has agreed to invest approximately $1.1 billion US as equity in the project, which substantially covers planned construction costs through the end of 2020.

The remaining $6.9 billion US is expected to be funded through a combination of a $4.2-billion project-level credit facility to be fully guaranteed by the Alberta government and a $2.7-billion investment by TC Energy.

The 1,947-kilometre project will be able to carry 830,000 barrels of crude oil per day from Hardisty, Alta., to Steele City, Neb., where it will connect with TC Energy’s existing facilities.

The provincial government says the pipeline project will create more than 1,400 direct and 5,400 indirect jobs in Alberta during construction and will reap an estimated $30 billion in tax and royalty revenues for provincial and federal coffers.

Construction will begin immediately in Alberta, at the Canada-U.S. border, Montana, South Dakota and Nebraska.

TC Energy — formerly known as TransCanada — says with pre-construction activities underway, the pipeline is expected to enter service in 2023.

In a statement, Alberta Premier Jason Kenney said the project was essential for the province’s future prosperity.

“This investment in Keystone XL is a bold move to re-take control of our province’s economic destiny and put it firmly back in the hands of the owners of our natural resources, the people of Alberta,” Kenney said. “The Government of Alberta is confident that this is a wise investment.”

Once the project is complete and in service, TC Energy expects to acquire the Alberta government’s equity investment under agreed terms and conditions and refinance the $4.2-billion US credit facility in the debt capital markets.

“Strong commercial and financial support positions us to prudently build and fund the project, along with our existing $30 billion secured capital program, in a manner that is consistent with maintaining our strong financial position and credit metrics,” TC Energy chief executive Russ Girling said in a statement.

Alberta’s investment in the project has symbolic power, said Warren Mabee, director of the Queen’s University’s Institute for Energy and Environmental Policy.

“This is probably welcome news because it is not just money to support workers and money to keep families going, it is a sign of support for the sector and a vote of confidence in a sector that has really been beat up,” he said.

The Canadian Energy Pipeline Association (CEPA) said in a statement that construction of Keystone XL will be a big boost for Alberta’s economy, as well as that of Canada.

“It is essential that Canada can continue to attract major investments like Keystone XL, which will result in billions in government taxes and royalties and improved market access for Canadian resources,” said CEPA president Chris Bloomer.

The project was first proposed more than a decade ago but has faced numerous hurdles and had been rejected by the Obama administration.

However, U.S. President Donald Trump has worked to revive the project and been a strong backer of the pipeline.

“We appreciate the ongoing backing of landowners, customers, Indigenous groups and numerous partners in the U.S. and Canada who helped us secure project support and key regulatory approvals,” Girling said.

“In addition, we thank U.S. President Donald Trump and Alberta Premier Jason Kenney as well as many government officials across North America for their advocacy without which, individually and collectively, this project could not have advanced.”