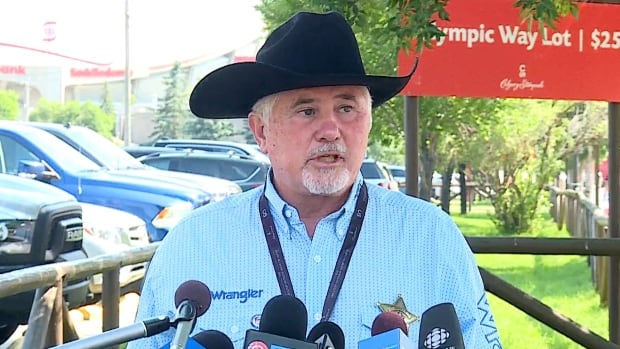 Instead, he’s throwing his support behind the mayoral campaign of Jeff Davison, one of three city councillors seeking the mayor’s seat.

“I can say as a councillor — and we normally don’t say this publicly — I have worked with all of the candidates that are running and I am confident, and it was an easy decision for me, to support Jeff. He has an excellent business background,” Sutherland said during a press conference outside of the Calgary Stampede on Tuesday.

“He actually collaborates and gets things done and over the line, and I can’t say that about the other councillors.”

A total of nine incumbent councillors are not running again, and neither is Mayor Naheed Nenshi.

Sutherland was first elected to council in 2013.

The councillor said that during his time in office, he helped bring more than $4 billion in investment to his ward, including the remodelling of Bowness Park and the creation of Paskapoo, Haskayne and Dale Hodges parks.

Sutherland sat on multiple committees and boards, and said he was proud to represent the Métis Nation of Alberta as well as his constituents.

Sutherland said it’s important to him that the mayoral seat not be filled by an outsider to council, as the role will require the candidate to get off the ground running to work on Calgary’s economic recovery.

There are 20 candidates so far running for mayor.