Some business owners and stakeholders are expressing confusion and disappointment after the Alberta government announced that Stage 2 of its reopening plan would start with a scaled-back approach to easing restrictions.

Instead, Premier Jason Kenney, Health Minister Tyler Shandro and Chief Medical Officer of Health Dr. Deena Hinshaw said on Monday that it would begin with libraries reopening at 15 per cent of fire code capacity.

Low-intensity individual and group fitness activities, such as light strength training, Pilates and tai-chi, are also now permitted at gyms.

But high-intensity workouts including spinning and CrossFit currently remain prohibited, and restrictions on hotels, community and banquet halls, and conference centres will continue until Stage 3 — “at least” three weeks away, Shandro said Monday.

“To be honest, my heart stopped a bit [when I heard the announcement],” said Christine Dairon, the marketing director for the Delta by Marriott Calgary South.

She was hopeful that Stage 2 would allow hotels to open some meeting spaces that have been closed for months.

“I’d say we’re definitely disappointed … but we definitely support the government’s decision, and know that I’m sure factually, it’s the right move. It’s just still hard to hear sometimes, as staff in the hotel.”

According to Dairon, the ongoing restrictions have prompted hotels to become more creative.

They have brainstormed ways to make up for lost revenue, and offered staycations and romantic packages for guests.

“It’s almost a year anniversary now, [and] looking back it’s been quite the emotional roller-coaster for us. But, you know, we try to do as much as we can, and be very creative with different ideas that we have in the hotel,” Dairon said.

“I was really positive and hoping that would open up and be the next stage. So yes, we’re just extremely disappointed right now.”

Kenney acknowledged on Monday that the announcement would likely come as a disappointment for some.

He cited plateauing case numbers, a slight increase in the testing positivity rate, and climbing variant cases — which are estimated to be 30 to 50 per cent more infectious than the common strain of the virus — for the decision to delay the full launch of Stage 2. 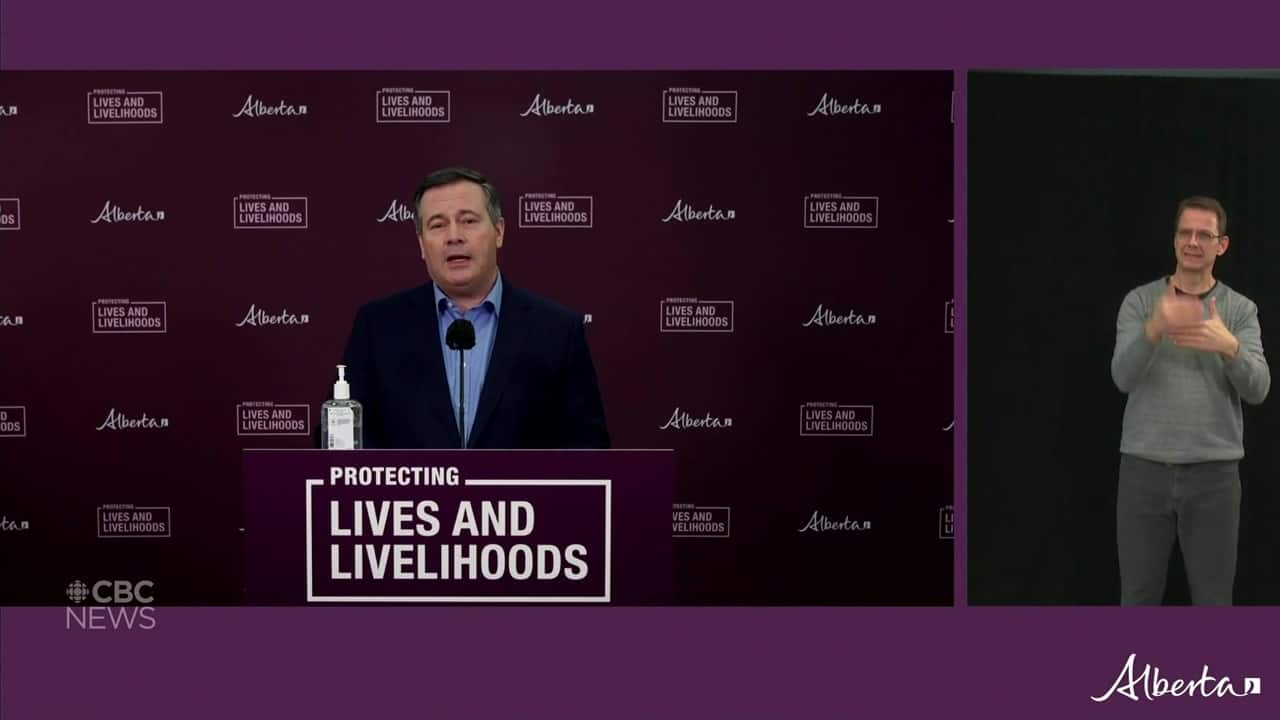 Alberta cracked open the doors of libraries and gyms Monday in a careful lifting of restrictions aimed at keeping COVID-19 in check, says Premier Jason Kenney. 2:35

“I know that many Albertans want us to relax many more health measures today, but we cannot and we must not allow exponential growth to start to take hold, driven by these new, more contagious variants,” Kenney said.

“To every Albertan that is worried that we’re moving too slowly, and who longs for life to get back to the way things used to be, I hear your concerns, I share them. We all want to get back to that place as soon as possible. But for that to happen, the game-changer is the vaccine.”

In late February, a group of Edmonton medical staff also called on the province to delay plans to move forward with further relaxation of COVID-19 measures.

The end of their ropes

But Scott Wildeman, president of the Fitness Industry Council of Canada and an instructor with GYMVMT in Calgary, said when Alberta’s gyms were operating with fewer restrictions, their safety protocols were robust.

And Stage 1 — which allowed one-on-one fitness training — only helped a small number of facilities, while many didn’t open at all, he said.

He also believes the delay in opening more thoroughly now will likely be the end of many fitness studios that focus exclusively on high-intensity workouts.

“Facilities are at the end of their ropes. So by saying no to high-intensity classes, those studios, a number of them won’t be here in April, and that’s just the bottom line,” he said.

“They’ve extended, they’ve borrowed, they’ve put their life savings into this and those groups are really in trouble … It’s been completely decimating to our industry.”

‘Cherry-picking which businesses can survive’

One business feeling the ongoing strain is Crush Camp, a boutique fitness studio in southwest Calgary that specializes in high-intensity interval training workouts.

Owner and CEO Emily Slaneff said she had been involved with conversations about safely reopening with the government, and Monday’s announcement took her by surprise.

“We only found out, unfortunately, at the same time as everybody else did today, when the province has promised to give advance notice of at least a week in the past. And they just didn’t do that,” Slaneff said.

“In the meantime, we’ve also lost lockdown support from the federal government for our rent support, so it’s actually costing us more as we are just trying to react in real time.”

Slaneff anticipates that trying to differentiate activities by high-versus low-intensity will make rules complicated and confusing for gym-users.

“What’s high intensity for me might be low intensity for you. Every individual is different, and it just unfortunately creates a bit of a mess, to be honest.”

Crush Camp is trying to come up with an alternative plan that would allow the facility to reopen, she said — but by keeping high-intensity workouts off the table, she feels some gyms are inherently in an unfair position.