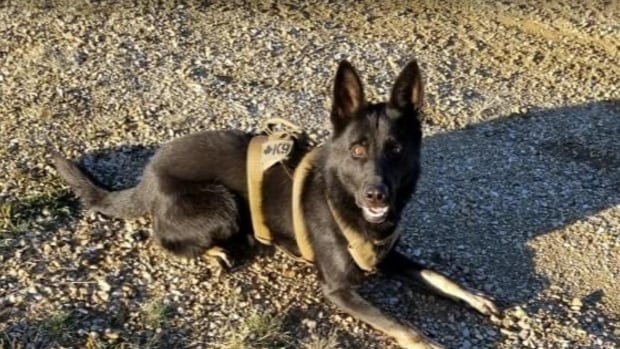 The mayor of High Prairie says flags in the northern Alberta town have been lowered to half-mast today to honour the on-duty death of a police service dog.

“The thought behind it obviously was a canine is like a member of the RCMP. So that’s why we lowered it,” Mayor Brian Panasiuk told CBC News.

RCMP have been tracking a male suspect in the Winigami Lake Provincial Park, located northeast of High Prairie, since Thursday morning.

High Prairie is about 370 kilometres northwest of Edmonton.

The ongoing operation began when McLennan RCMP conducted a traffic stop on Thursday morning for a person with outstanding arrest warrants.

Police said the vehicle was not pursued when it failed to stop for police because of public safety concerns.

Soon after, High Prairie RCMP spotted the vehicle turning into the provincial park. The area was contained and police found the vehicle abandoned.

A large police operation has been mounted to track down the suspect.

“There is a huge police presence in our community,” Panasiuk said. “We see the helicopters, the vehicles. They’re definitely here and around. So they’ve brought people in to deal with the incident.”

The mayor said the terrain would make it difficult to find a suspect.

“The dog would have been ideal to track somebody who’s running through the bush like that, ” Panasiuk said.

The mayor said the community lobbied for years to get a police dog and PSD Jago and his handler, Cpl. Scott MacLeod, arrived in High Prairie in August last year.

“We finally got one and then this happens, so the setback is going to be huge,” Panasiuk said.

RCMP are holding a press conference at Edmonton headquarters today.