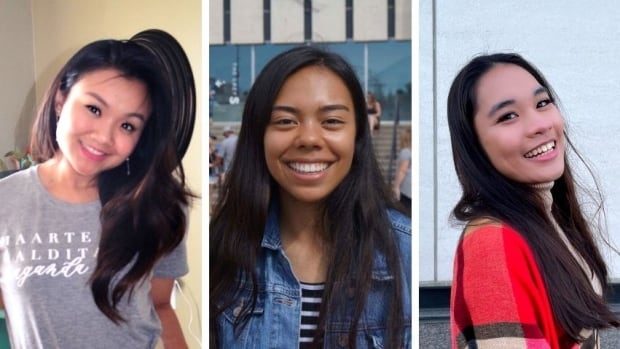 We’ve heard a lot of different perspectives from Filipino-Calgarians so far during our CBC Calgary Filipino bureau project.

But it’s the next generation that will take what their parents and grandparents have built in this city, and lead their community into the future. They will face different challenges, different joys.

We wanted to hear the perspective of three young Calgarians of Filipino descent — what matters to them, how they’re staying connected to their community, while still forging their own way.

You can hear their conversation below, or read through an abbreviated version. Both have been edited for clarity and length.

Three next generation Filipino-Calgarians hash out the issues that are important to them and how things are changing over time within their community 18:57

Paul Karchut: Heather, I’m wondering how your own sense of Filipino community may be different from the sense that your parents or grandparents might have had and how it’s changing?

Heather Resendes: I guess my experience is very different because, for me, I was born here and I’m half Filipino. And I guess growing up, it’s always been “Is my experience valid? Is it as valid as someone who’s full Filipino, someone who’s come from the Philippines and is living here?”

And yes, I guess, through university, it’s been helping me a lot to connect with my culture and realize there’s so many different experiences — people from the Philippines, people who are born here, people who are half-Filipino. And really it’s all about coming together and realizing all experiences are unique.

When I was younger, I would be, “Oh it’s easier to fit in by fitting in with the Canadian culture.” So I wouldn’t really look to my Filipino culture and I’d kind of just avoid it. But as I got older, it was like, “Oh, no, this is a part of who I am.”

PK: There’s this term that’s been coming up a lot in the stories that we’ve been covering, the 1.5 generation. So people who were born in the Philippines and then came to Canada, often as children. Roxanne and Angelica, you’re of that 1.5 designation. I’m wondering why it’s important for this to be, Roxanne, a clear differentiation?

Roxanne Singlot: Both of those identities have very different experiences attached to it.

Like me, 1.5, I came here when I was 19. So most of my growing up, most of all of my childhood memories have been from the Philippines. It’s adapting to a very different culture… and for many of us, there’s also that component of reunification.

So a lot of 1.5 they’ve been separated from their parents from a very young age. And then they come here and then they get reunification with their parents and that creates a whole lot of different family dynamics.

Filipinos actually make up a great percentage of domestic violence cases and that’s very unfortunate. A lot of that stems from reunification so when you have one partner here for 10 years and then another partner comes in after 10 years, they’re pretty much, I would say, strangers. And a lot of work needs to be done there, but there’s not a lot of resources to do that work.

Like what Heather was saying about her experience, that’s something that time and time again, I hear from a lot of my second generation friends. From a very young age, they were already socialized to not really associate with their Filipino identity or their Filipino community because of the internalized racism that their families and communities have.

PK: Angelica, you’re also part of this 1.5 generation. What was your experience like when you first came to Canada?

Angelica Torres: I had to also adapt a lot since I was young. Adapting was a very difficult thing that I had to do because I had to also learn a new culture, like speak English since I got used to my own language.

PK: Now, that said, and there’s no right or wrong here, but Angelica, how many of the second or third generation Filipino kids that you know in this city are choosing just not to engage at all with their roots?

AT: I met a lot of friends who are full Filipino and they don’t speak their language or they weren’t used to hear(ing) our language … And it’s very surprising.

PK: What do you see, Roxanne?

RS: I’m fortunate enough in (Youth Empowerment Program) to be seeing a lot of youth that are interested in appreciating and understanding their Filipino side, the Filipino heritage.

But there are also teenagers who I feel are making much more of a conscious decision that they just don’t want to be associated with the Philippines, with their Filipino heritage and identity.