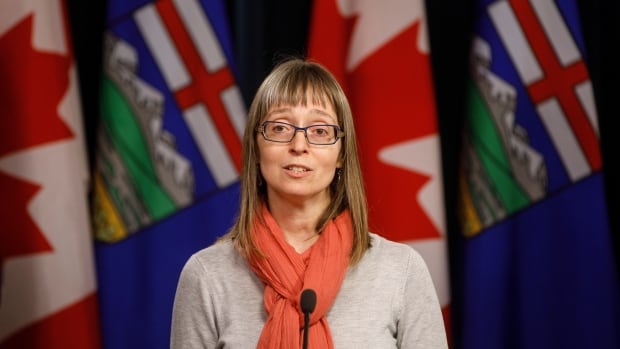 Health officials were tracking outbreaks of COVID-19 linked to four Edmonton restaurants on Tuesday, as the province Alberta reported 41 new cases of the respiratory illness.

“We are encouraging anyone who attended any of those locations in the last two weeks to get tested.

“I want to reiterate that these restaurants, and those who have been tested, are doing the right thing by taking steps to contain this outbreak. As I have said before, it is critical that we do not shame those who test positive, but rather support them to isolate and work with public health to do contact tracing and followup as these restaurants have done.”

Public health is also tracking an outbreak at The Verve, a highrise apartment building in Calgary, which has been linked to 49 cases, 33 of them still active. The cause of that outbreak is still under investigation, Hinshaw said.

One Edmonton region, Mill Woods West, and Calgary Centre, have been placed under watch classifications.

Regions with at least 10 active cases and a rate of over 50 active cases per 100,000 population are considered above threshold and watched to see if additional health measures need to be put in place.

Also on Tuesday, the limit on outdoor gatherings in Alberta was increased from 100 to 200 people as the province prepares for a Canada Day celebration unlike any seen in at least a century.

All public health measures, including physical distancing, remain in place.

“Seated outdoor events will still require the necessary space between families and cohorts within stadium-style seating,” the news release said.

The 41 additional cases reported on Tuesday brings the total number of active cases in the province to 549.

The breakdown by region was:

Case numbers in the province have been inching up in recent days. Alberta reported 71 new cases of COVID-19 on Monday.

It was the biggest spike in new cases since May 16, when 72 were reported.

As of Tuesday, there were 559 active cases in the province, with 41 people in hospital, including nine in intensive care.

So far, 154 people in the province have died from the illness.

The age breakdown of those who have died is: