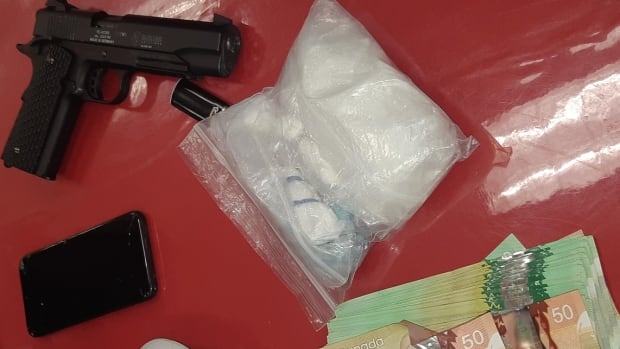 Calgary police say an arrest at a Calgary store led to the discovery of a loaded handgun and more than $15,000 worth of drugs.

In a release, police say on Jan. 24 around 4:30 p.m. they were called for suspicious activity inside a store in the East Hills Shopping Centre in the city’s southeast.

The store’s loss-prevention officer contacted police after recognizing a man wanted on a Canada-wide warrant.

The man attempted to flee the scene after police arrival but was taken into custody.

A woman who was with him and had eight outstanding warrants was also taken into custody.

Police say during the arrest they seized a loaded .22-calibre pistol, 110 grams of methamphetamine valued at $11,090, a small amount of cocaine, crack cocaine, fentanyl, and prescription drugs with a total value of $4,700 as well as $3,890 in cash.

“This is a great example of our community working together,” he said.

“This individual was carrying a loaded weapon in a public space, which created a significant risk to public safety.”

Vincent Joseph Walker, 31, of Calgary, has been charged with 13 offences.

Walker will next appear in court on Feb. 5.

Brittany Michelle Barling, 30, of Calgary, has been charged with nine offences. This includes failing to comply with a court order, unlawful possession of identity documents, possession of a controlled substance  as well as the eight additional outstanding warrants.

She will appear in court on March 1.