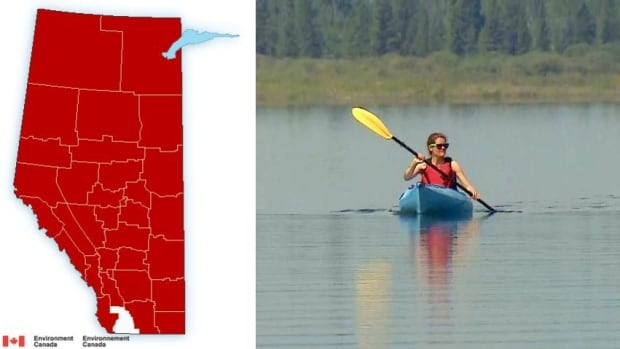 The entire province of Alberta (with one exception) was under a heat warning Saturday.

Environment Canada said some regions were expected to see temperatures exceeding 32 degrees C through the long weekend, with overnight lows in the range of 14 to 16 C.

The only region without a heat warning at 5:30 p.m. was the area of Cardston, Fort Macleod, Magrath, despite the temperature there sitting at a sweltering 32 C late Saturday afternoon.

The temperature in Calgary and Edmonton was expected to hit at least 29 C.

The warnings cautioned that residents and visitors should:

“Monitor for symptoms of heat stroke or heat exhaustion, such as high body temperature, lack of sweat, confusion, fainting, and unconsciousness,” Environment Canada said, adding that particular attention should be paid to seniors, infants, children and people with pre-existing conditions, as well as people who are self-isolating.

Severe thunderstorms were also on the forecast for the southwestern part of the province, with strong winds, nickel-sized hail and heavy rain expected for areas like Kananaskis and the Municipal District of Ranchland.