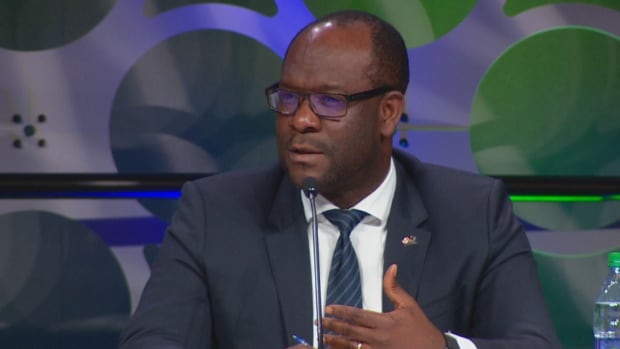 The Alberta government is asking Ottawa to amend the Criminal Code to allow people to carry pepper spray for self-defence.

Justice Minister Kaycee Madu sent a letter to his federal counterpart and the federal public safety minister Wednesday morning asking for the changes.

A copy of the letter was tweeted by Madu after being first reported by the Calgary Sun.

Recent hate-motivated violence in the province prompted the correspondence, the letter explains, saying victims of these crimes would have benefited from carrying pepper spray.

“I want to make sure that citizens have all the tools that they need to defend themselves in a way that helps them ward off these attackers,” Madu told CBC News.

In the past eight months, there have been numerous attacks across Alberta, many of which police say were rooted in anti-Muslim or anti-Black sentiment. Women have been predominantly targeted.

Capsaicin spray, also known as pepper spray, is illegal to carry, and if used against a person (even in self-defence), it can result in criminal charges.

Changes to the Criminal Code — like the ones the province is asking for — are only possible at the federal level.

“It is sadly ironic that a vulnerable person carrying pepper spray for self-defence could quite possibly receive a longer sentence than her attacker,” the minister said.

“My hope is they will take this seriously, work with us, implement the changes we’ve asked for, so that we can protect Albertans.”

Not ‘a slam dunk,’ expert says

Lisa Silver, an associate professor in the University of Calgary’s law faculty, said while the intention is laudable, it could give women a false sense of security from prosecution.

Even if pepper spray is removed from the list of prohibited weapons, if it is used against someone, that would still be classified as assault under the Criminal Code. And using self-defence as legal protection would still apply the same way.

“Anything could be a weapon under the code,” she said.

“Self-defence does not detract or take away from an offence itself. It is merely a justification for committing a crime.… You’re almost setting up the person or women to face charges.”

Silver said more needs to be done to address hate crimes, but this notion isn’t “a slam dunk.”

The minister is also asking Ottawa to establish mandatory minimum sentences for those convicted of racist, hate or bias-motivated crimes, saying there is a “pattern of leniency” in Canada’s criminal system when it comes to hate-motivated crimes.

He used an example of an Edmonton man sentenced to seven months for three separate race-motivated assaults. That individual spent only 35 days in jail after credit for time already served.

Madu announced the creation of a provincial hate crimes unit and a community liaison after the killing of a Muslim family in London, Ont., in June.

The team will be composed of law enforcement and civilians empowered with tools to investigate, enforce and prosecute hate-motivated incidents. The NDP had proposed a similar unit when it was in government, but the agency was never assembled. The liaison’s role will be to consult with affected communities about how to more comprehensively address hate crimes.

No date has been announced for the official launch of either of those initiatives, but Madu promised both will be fully operational before the end of the summer.

Later in June, Premier Jason Kenney announced the Alberta Security Infrastructure Program to give grants to ethnic and religious groups for them to improve security or technology at their places of worship. Applications will open in the fall, with a pot of $500,000 available.

While the letter escalated the matter of addressing hate crimes to Ottawa, Madu said he’ll continue to make adjustments to issues under his purview as needed.

“If there’s more that needs to be done by us within our provincial jurisdiction, I will do so.”