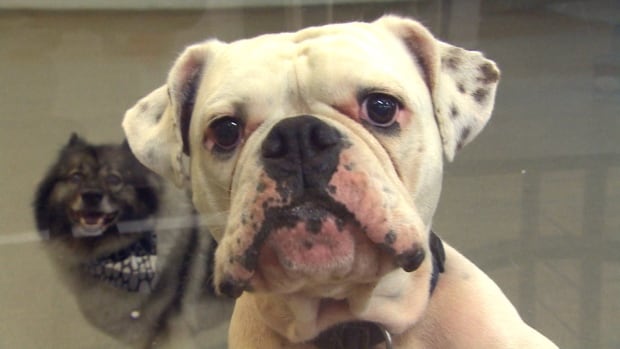 Some Calgary veterinarians are seeing a spike in kennel cough of up to 50 per cent more than normal.

“Kennel cough is not a new thing in dogs, but we definitely have seen an increased incidence this past year,” veterinarian Jenefer Stillion told the Calgary Eyeopener.

“It’s probably not a simple reason, but some things that may be contributing include a lot more people spending time with their dogs right now.”

Stillion, the medical director at Fish Creek Pet Hospital, says kennel cough is a term used to group together the different organisms that can cause an infection of the upper respiratory tract or windpipe, leaving dogs with that distinctive dry, honking cough.

Uncomplicated kennel cough is not a serious condition, and most dogs get better within 10 days to two weeks.

In rare cases, it can spread to the lungs and cause pneumonia, which can have serious outcomes.

So why the sudden spike?

“We know that it’s infectious. And so any time you’ve got a lot of dogs together, say, at the local dog park or at boarding facilities, then we know that there may be a spike in incidents,” Stillion said.

“We also think that a lot of people have been staying home with COVID and not be necessarily pursuing wellness care like vaccines for their dogs and cats. And we do vaccinate against some of the common things that cause kennel cough.”

Stillion said most dogs will not feel ill when they get kennel cough — they’ll have the cough but should otherwise be energetic and able to do all their usual activities.

Most people still take their pet in to be treated, however.

“The reason that we often see these pets come in on an emergency basis is because of that cough. And it not only can be kind of disruptive for the dog itself, but more often for the owners, especially at night when they’re trying to sleep,” Stillion said.

Veterinarians can prescribe a cough suppressant to help.

“So oftentimes if the cough is very disruptive — and it can be violent enough that a dog will then kind of retch or vomit following coughing — we will prescribe a cough suppressant to help with the irritation and sore throat,” Stillion said.

“Sometimes we’ll even prescribe antibiotics, mostly to treat any potential bacterial cause or to hopefully prevent it from spreading to the lungs, where it can really cause things like pneumonia.”

Stillion recommends always having the cough suppressant prescribed by a veterinarian, so they can fully evaluate what’s going on.

“We do know in some circumstances that if that cough is not from kennel cough and it’s coming from something else, like a pneumonia, we don’t want to suppress that cough,” she said. “So that’s another good reason to make sure your veterinarian has a look at things before prescribing one.”

Kennel cough is transmitted between dogs in close contact through respiratory secretions, and from some surfaces, such as shared food or water bowls. Stillion said there is no evidence to show that it can be transmitted between humans and dogs. She also said the fact that cases are up does not seem to indicate a new or unusual strain of the virus.

“The only way we have to tell what’s causing a kennel cough is if we do respiratory testing on those dogs, and because it’s a condition that generally is not life threatening and gets better quickly, many owners don’t want to go the route of testing,” she said.

“I can tell you from the dogs that we have tested that none of them have come back with any novel strains as far as new organisms that are causing their infection.”

That said, what can pet owners do to protect their pooches during this spike?

“The most important thing is that if your dog is showing symptoms like a cough, you want to make sure that you don’t bring them to the dog park,” Stillion said.

“So until that cough goes away, which is usually going to be 10 to 14 days, you want to keep them home and make sure that you’re not helping spread that infection by taking them to places like the dog park and then just be aware of the risk.

“And if you can, get in for those wellness vaccines.”

Listen to the full interview on the Calgary Eyeopener here:

Calgary veterinarians are seeing an increase in dogs with kennel cough. We find out why. 6:08

With files from the Calgary Eyeopener.