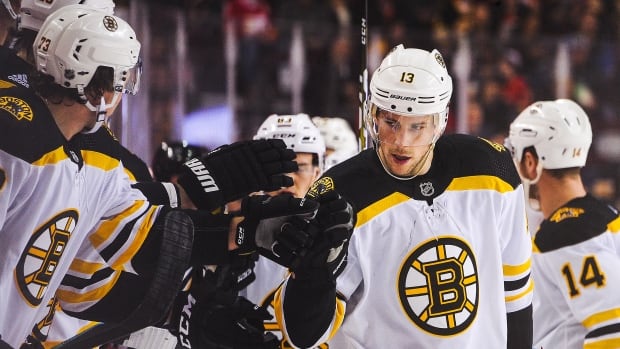 Patrice Bergeron continued his torrid scoring on Friday night with a pair of goals to lead the Boston Bruins to a 4-3 victory over the Calgary Flames.

Bergeron has scored 21 times in 32 games since returning from a lower-body injury on Dec. 9, an injury that sidelined him for seven games. That ties him with Alex Ovechkin for the NHL’s second-most goals over the span, behind only Auston Matthews of Toronto (25).

Brad Marchand and Charlie Coyle also scored for Boston (39-11-12), which opened up a five-point lead on Tampa Bay atop the NHL’s overall standings. David Pastrnak chipped in a pair of assists.

The Bruins wrap up their four-game road trip on Saturday night in Vancouver.

Mikael Backlund had a pair of goals and Johnny Gaudreau also scored for Calgary (31-25-6), which opened the night clinging to the second wild-card spot in the Western Conference. The Flames head out on a five-game road trip that begins on Sunday in Detroit, before meeting up with the Bruins again on Tuesday.

Bergeron got the comeback started at 6:12 of the first when he outmuscled Sean Monahan at the side of the crease to bang in a puck as it bounced out front off the end boards.

The visitors tied it six minutes later. After Alexander Yelesin’s point shot from the Bruins blue line was blocked, the puck was corralled by Karson Kuhlman, who sprung Coyle on a breakaway and he cleanly beat Talbot with a move to his forehand.

Halak, beaten three times on the first four shots, was perfect the rest of the way, finishing with 18 saves to improve to 16-6-6.

Calgary got off to a fast start with Backlund scoring 20 seconds into the game. Noah Hanifin’s shot missed the net, Rasmus Andersson put the carom off the goal post, then Backlund put it past Halak.

Backlund scored again at 2:34, one-timing a Tobias Rieder saucer pass over Halak’s shoulder for his 12th goal of the season and sixth in the last seven games.

Boston got on the scoreboard 24 seconds later. Pastrnak’s shot went wide off the skate of Flames defenceman Michael Stone before it was flicked in by Bergeron for his 29th of the season.

Gaudreau restored Calgary’s two-goal lead less than a minute later, when he drove to the net and had the puck deflect in off the stick of Bruins centre David Krejci.