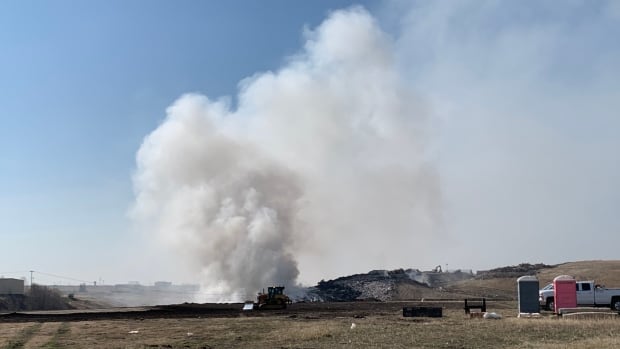 Firefighters are still working to extinguish a fire that started late Friday evening at a landfill in southeast Calgary.

On Saturday morning, Battalion Chief Paul Frederick told CBC News that the fire is now under control, but it is still smoldering and is “producing a significant amount of smoke.”

Around 8:10 p.m. on Friday, the Calgary Fire Department (CFD) responded to multiple calls about a plume of smoke emanating from ECCO Recycling and Energy Corp, near 24th Street and Quarry Park Boulevard S.E., in the Quarry Park area.

Firefighters went to the top of the landfill where landfill staff were using heavy equipment to try and extinguish the fire, the release said.

Staff used a large bulldozer to put out the fire, but it sustained mechanical failure and was “quickly overcome” by the fire, the release said.

The operator was able to get out unharmed, it added. But once the bulldozer was engulfed in flames, the fire spread to construction materials across the area, Frederick told CBC News.

Getting water to douse the flames was a particular challenge for firefighters, because the nearest hydrant was about one kilometre away from the scene, the news release said.

Crews resorted to using a remote water supply and hose streams. Members of the Calgary Police Service, CP Rail and Alberta Environment all came to the scene to assist with resources.

People living in the Quarry Park area and across southeast Calgary have reported the presence of heavy smoke Saturday.

Environment Canada issued a special air quality statement for the city of Calgary, particularly in the southeast due to smoke from the fire causing “elevated levels of air pollutants in the area.”

Fire crews are expected to continue to work at the scene for the rest of today, Frederick said.

The fire department advises the public to avoid the area for the next 24 hours.

The cause of the fire is still unknown.