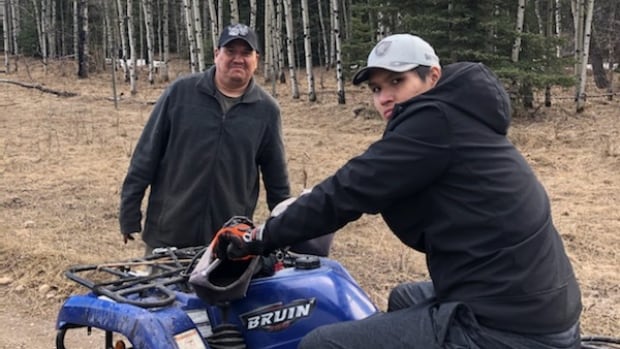 The father of a man killed in a hit-and-run by a potentially speeding, inebriated driver says the family is facing a long, tough road to heal from the tragedy.

Blade Crow, 21, was standing on a raised traffic island with his girlfriend Aaliyah around 8:20 p.m. Thursday, waiting to cross the street near Chinook Centre mall in Calgary. The couple was pushing Aaliyah’s baby Ember in a stroller.

The driver of an SUV failed to make the right hand turn from southbound Macleod Trail on to westbound Glenmore Trail, police said, instead driving up onto the island, hitting the family from behind, and driving across two more raised islands before finally coming to a stop after hitting a snowbank.

Crow was killed, and Aaliyah and Ember taken to hospital in life-threatening condition.

The driver ran away on foot, and was arrested at a nearby Tim Hortons. Police said it’s believed speed and drugs factored into the crash.

Crowspreadswings said when he initially heard the news on Friday morning, he didn’t believe it.

Crowspreadswings said it’s hard being unable to visit Aaliyah and Ember in the hospital — the family is especially concerned about the baby’s condition.

‘His whole world was his girlfriend and that child’

Crowspreadswings described his son as outgoing, liked by all.

“You always remembered him, he just left that kind of a mark on you … It’s hard to deal with, I guess, you know, because, you know, nobody ever expects to lose a child,” he said.

Crow had recently moved back to Calgary from Vancouver, and was working as a roofer.

“All he did was work. His whole world was his girlfriend and that child. They meant everything to him.”

Crowspreadswings joked that he’d often ask his son to go hunting and his son was too focused on earning a living to support his family — a role reversal from the usual father-son dynamic.

Loved ones plan to hold a candlelight vigil at the crash site at 7 p.m. Sunday.

Friends have also set up an online fundraiser to support the family, and cover funeral costs.

“The driver literally devastated everybody’s lives, even himself. It’s a tragedy all the way around,” Crowspreadswings said.