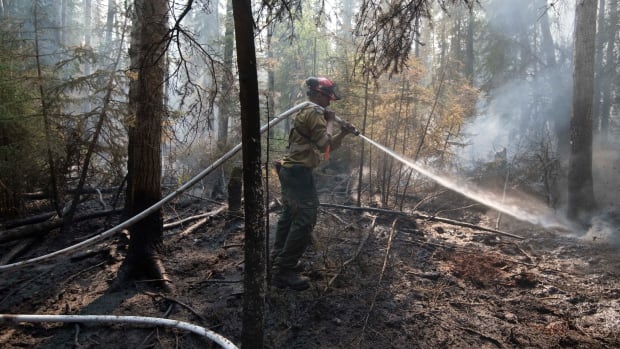 One person has been fined $600 after an explosive gender reveal party near Fort McMurray sparked a wildfire.

The fire, which started in the Fort McMurray Forest Area in the afternoon on May 31, was ignited by a family who took to the woods to celebrate a new baby.

Wildfire officials are declining to provide further details on the exact location of the fire or the person charged but are warning Albertans about the unusual cause: an exploding target.

The discs, often loaded with coloured powder, detonate when struck by a projectile, such as a bullet.

This is the third unintentional wildfire started by an exploding target in Alberta so far this wildfire season, said Travis Fairweather, a wildfire information officer with Alberta Wildfire.

“When you fire a round at them and it connects, it creates a small explosion,” Fairweather said in an interview Tuesday.

“Especially in dry conditions, that initial explosion can create some heated debris… and when that hits the ground, it can simmer and certainly start a wildfire.”

The projectiles are often used for target shooting but have become a popular gimmick at gender reveal parties, where expectant parents use blasts of blue or pink to announce if their baby will be a boy or girl.

“[Gender reveal parties] do seem to be growing in popularity and people are trying to one-up the last one, that is for sure. I think I saw an exploding golf ball once,” Fairweather said.

“Certainly we’re hoping that the exploding targets don’t become a more common method for that.”

Nearly half a hectare of forest was destroyed by the fire, Fairweather said.

The fire was called into 911 and crews arrived shortly after 1 p.m., Fairweather said.

Local firefighters assisted 10 wildland firefighters in dousing the flames. By 2:40 p.m., the fire was fully extinguished.

Human-caused fires on the rise

The person responsible was charged under the Forest and Prairie Protection Act, Fairweather said. RCMP were also involved in the investigation, he said.

Fairweather said human-caused wildfires are on the rise.  This year, 76 per cent of wildfires have been caused by people.

Last year, 88 per cent of all wildfires were human-caused. Both numbers are well above our five-year average of 68 percent, Fairweather said.

The province requires written permission to use fireworks or exploding targets in a forest protection area and he said they should be used with extreme caution.

We arrived long after the blue or pink plume had dissipated.– Travis Fairweather, wildfire information officer.

While fireworks and exploding targets can be fun, Fairweather said, they can also come with a hefty price tag if it leads to an inadvertent fire.

A person found responsible for starting a wildfire may have to pay a $600 fine or be held liable for the entire cost of fire-fighting efforts, he said.

Fairweather said he does not know if the family involved in the gender reveal was expecting a boy or girl but their story helps dissuade other Albertans from taking unnecessary risks.

“We’re left to speculate,” he said.  “Unfortunately, we arrived long after the blue or pink plume had dissipated.”