More detail on what you need to know today in Alberta 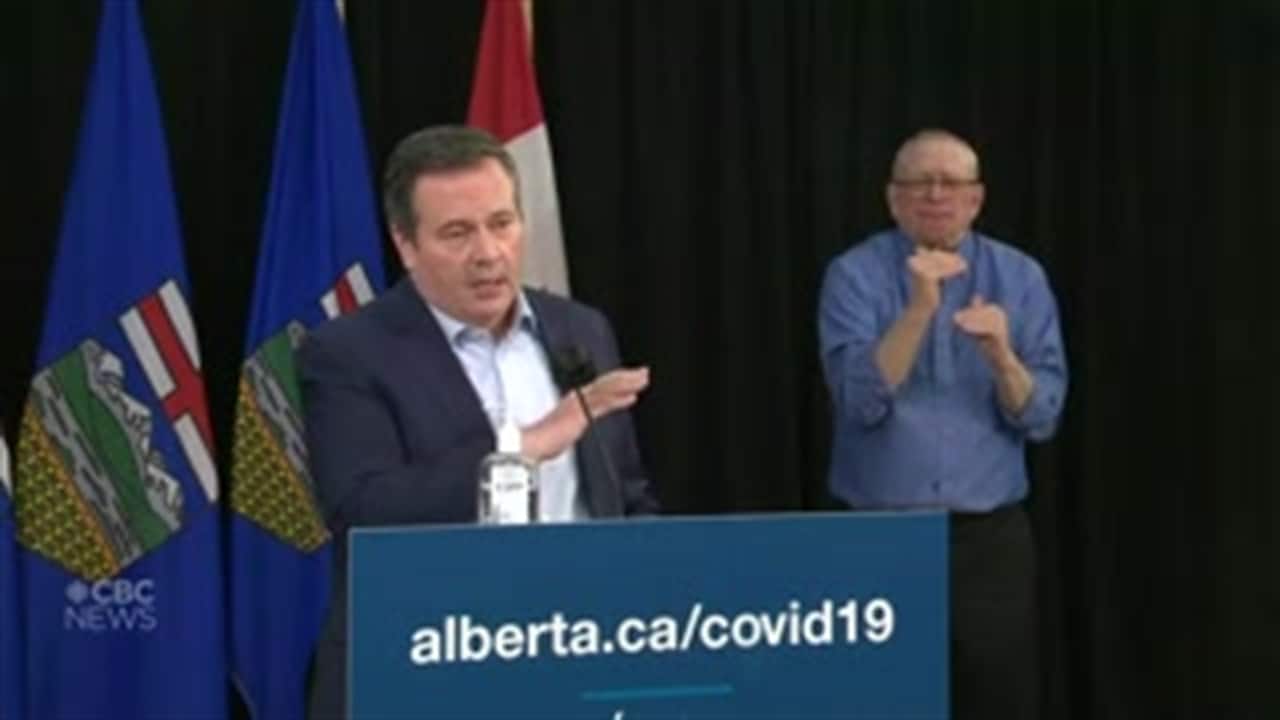 Alberta Premier Jason Kenney says current provincial restrictions intended to slow the spread of the coronavirus will remain in place for at least two more weeks. 0:55

Alberta reported 989 new cases of COVID-19 and a record 31 additional deaths from the disease on Saturday, according to the latest update posted to the province’s website.

There are 827 people in the hospital due to the disease, 132 of whom are in intensive care. The province performed 13,540 tests on Friday.

There are 14,437 active cases of COVID-19 in Alberta, up by 809 from Friday. This is the largest single day increase in active cases since late November. Saturday marks two weeks from Christmas. Only 149 more people recovered from the disease, bringing the total to 94,932.

The next live update with Alberta’s Chief Medical Officer of Health, Dr. Deena Hinshaw, will be on Monday.

Alberta has reported its first case of the coronavirus variant first discovered in South Africa.

“This case involved a recent traveller. The individual is in quarantine & there’s no evidence at this time that the virus has spread to others.”

The coronavirus variant is more infectious than the original COVID-19 virus and has rapidly become dominant in that country’s coastal areas.

Alberta Health told CBC News that four cases of the variant have now been found in the province.

The first case was found in late December and they have all been travel-related, with no evidence of further spread.

Vaccine appointments will be offered to health-care workers in medical, surgical and COVID-19 units, according to a press release on Friday.

As well, a directive from the chief medical officer of health has allowed non-Alberta Health Services employees — doctors, nurses and pharmacists — to deliver the vaccine.

Around 3,300 COVID unit staff and 15,400 medical and surgical unit staff in Alberta will now eligible for the vaccine starting immediately.

“There are many regulated health practitioners who are authorized and have the knowledge, skill and competence to issue a vaccine. This directive will help us empower as many of our dedicated health-care workers as possible to join the broader team and help immunize Albertans,” said Hinshaw in the release.

Transport Canada has quietly raised the mandatory age for children wearing face masks on planes from two to six years old. The move follows at least two public incidents where toddlers were kicked off domestic flights for not wearing a face covering.

Back in April, Transport Canada mandated that air passengers aged two and up wear a mask while travelling, to help stop the spread of COVID-19.

Under Transport Canada’s new revised regulations, children from ages two to five don’t have to mask-up if they’re unable to tolerate wearing one.

However, parents must still bring a mask onboard for their child — even if the child is likely to reject it.

Transport Canada said that it revised its rules on Nov. 10 in response to “updated guidance” from the Public Health Agency of Canada, which followed new World Health Organization recommendations. 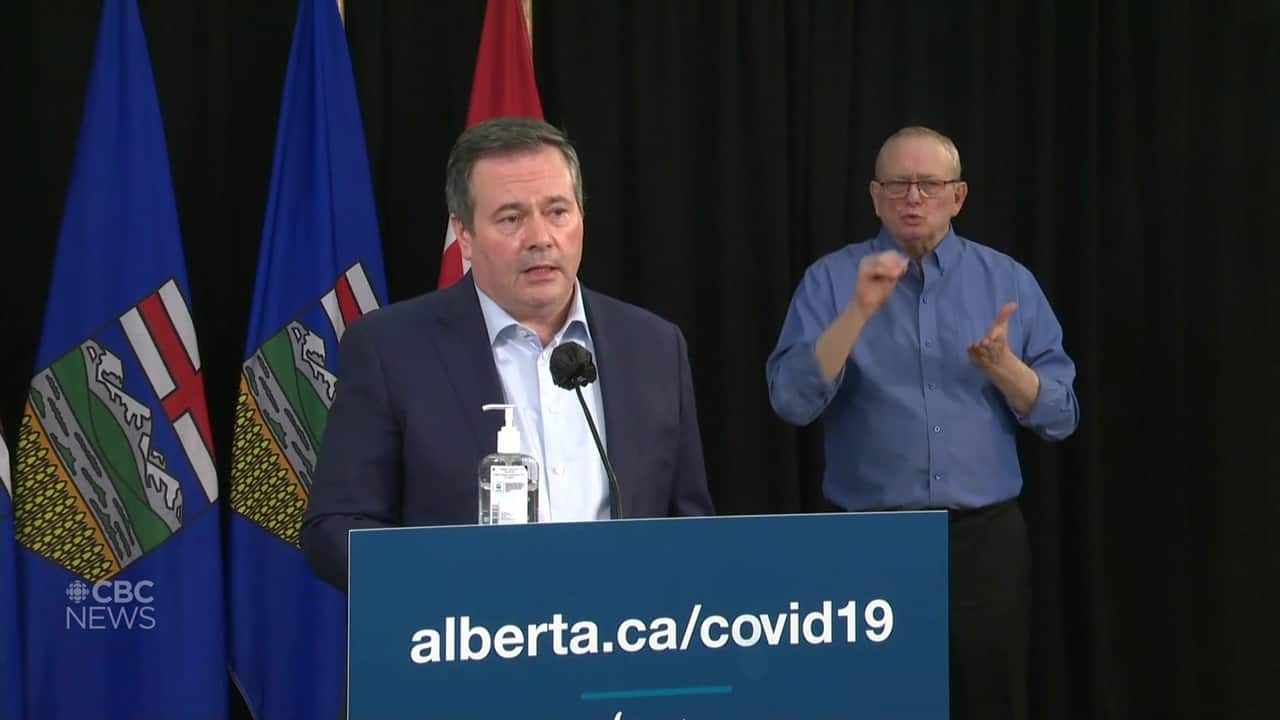 Alberta Premier and Dr. Deena Hinshaw say that schools will re-open on Jan. 11. 1:28

Alberta schools will resume in-person learning on Jan. 11, as the government planned before the holiday season, Premier Jason Kenney says.

“The decision to resume in-class learning on Jan. 11 is based on carefully considering the importance of attending school in person,” Kenney said Thursday at a news conference, “as well as the latest evidence of cases dropping in all school-related age groups in December.”

“At the beginning of the school year, families across Alberta made the choice that was best for their kids and their family situation as to whether or not to have their children attend in-person class this year. While about 20 per cent of families and students chose to learn at home, the majority of parents chose in-school learning.”

There was a reassuring trend in dropping case numbers for all school-aged groups in December following the most recent restrictions, the premier said, but while testing numbers declined over the holidays, as anticipated, the province saw a continued high positivity rate.

“Let me just pause there to put that in context, because we got used to high numbers in the past couple of months,” Kenney said. “But I remember from basically May through the end of September, a bad day would be a two per cent positivity rate, and in the last week or so, we’ve been seeing about seven per cent.”

Doctors in Red Deer say their hospital is under tremendous strain as it faces a wave of very sick COVID-19 patients.

The Red Deer Regional Hospital Centre serves close to half a million people in central Alberta and it is the only hospital in the region equipped to treat COVID-19 patients requiring intensive care.

According to Alberta Health Services, 38 people with COVID-19 had been admitted to the facility as of Thursday morning, including 17 in the ICU.

“We really have never seen patient volumes like this,” said Dr. Kym Jim, internal medicine specialist at Red Deer Regional Hospital. “Our intensive care has now overflowed into coronary care, which means patients in coronary care are now being managed in other areas of the hospital.”

The hospital’s ICU is equipped with 12 beds. With the expansion into the cardiac care unit, six surge beds have been added for a total of 18 beds —17 of which are filled by COVID-19 patients.

In addition, there are a number of other patients requiring intensive care for other reasons.

WestJet is cutting jobs and slashing its flight capacity by a third because of what the airline calls “instability in the face of continuing federal government travel advisories and restrictions.”

The Calgary-based airline said in a release Friday that up to 1,000 of its employees will be impacted by “furloughs, temporary layoffs, unpaid leaves and reduced hours.”

Ottawa recently changed the rules to require anyone coming into Canada to have a negative COVID-19 test in order to be allowed into the country. As soon as that happened, WestJet CEO Ed Sims said the airline saw “significant reductions in new bookings and unprecedented cancellations.”

“The entire travel industry and its customers are again on the receiving end of incoherent and inconsistent government policy,” he said.

“We have advocated over the past 10 months for a co-ordinated testing regime on Canadian soil, but this hasty new measure is causing Canadian travellers unnecessary stress and confusion and may make travel unaffordable, unfeasible and inaccessible for Canadians for years to come.”

In addition to the job cuts, the airline is also slashing about 30 per cent of its flights. That includes cutting its number of international flights from 100 this time last year to just five now.