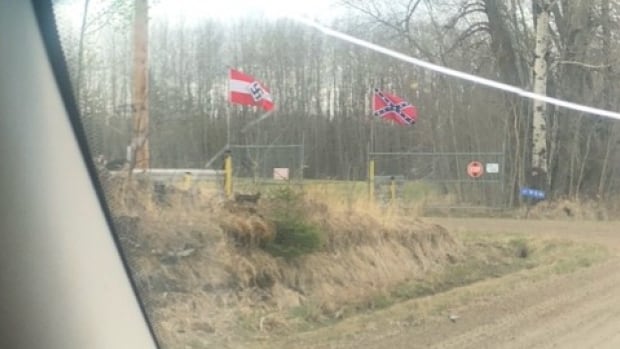 A woman living in central Alberta says she nearly crashed her vehicle when she saw a Nazi flag and Confederate flag flying side-by-side at a rural property.

For at least the past five years, a rural property owner who lives outside of Breton, southwest of Edmonton in Brazeau County, has displayed a Confederate flag at the entrance. On May 1, the owner added a Hitler Youth Nazi flag on the other side of his driveway.

When a neighbour drove past his property on May 9, she said she couldn’t believe her eyes, so she took a photo.

CBC News has agreed to protect her identity for personal safety reasons.

“I nearly drove off the road,” she said. “It shocked me because that’s not the community. That’s why I lost my biscuit and started contacting people.”

She said she called the local RCMP detachment, Brazeau County and the Friends of Simon Wiesenthal Center for Holocaust Studies (FSWC) in Toronto.

The FSWC contacted RCMP and filed a criminal complaint.

Officers went to the property the same day and confirmed the existence of the flags. They asked the landowner to take the flags down and he refused, an RCMP spokesperson said.

“Unfortunately, it doesn’t surprise me,” said Jaime Kirzner-Roberts, the FSWC’s director of policy.

“I think you can imagine that anybody that’s motivated to put up a Confederate or a Nazi flag has some kind of agenda.”

Last week, a Hitler Youth flag was also spotted on a flagpole south of the village of Boyle in northern Alberta. The property owner there agreed to take it down when asked by RCMP.

RCMP Const. Chantelle Kelly told CBC news that flying a flag is not in itself a criminal offence.

Investigators are now trying to determine if flying those particular flags is enough to be charged with wilfully promoting hatred or inciting the public.

She said RCMP would likely consult with the Crown to see if there’s the necessary intent to file hate crime criminal charges. She was not able to provide a timeline on how long it would take to make a decision.

The FSWC is encouraging RCMP to lay criminal charges.

“These symbols are promoting hatred,” Kirzner-Roberts said. “Here in Canada, the wilful promotion of hatred is illegal. It is a criminal act.”

Politician calls for removal of flags

Brazeau County Reeve Bart Guyon said he doesn’t know the homeowner, but hopes he’ll decide to take down the flags he described as disturbing.

“There’s no time for this type of symbol of hatred and racism to be displayed anywhere, let alone in Brazeau County,” Guyon said.

“People are pretty stressed these days from all the different things going on and the last thing we need is one more thing to worry about.”

The woman who blew the whistle on the flags flying outside Breton hopes the property owner will have a change of heart.

“I hope there’s enough pressure that it makes it uncomfortable for him,” she said.

The incident has made the Guyon, the Brazeau Country reeve, very uncomfortable.  “The world is changing,” he said. “I hope this isn’t the direction it’s going.”