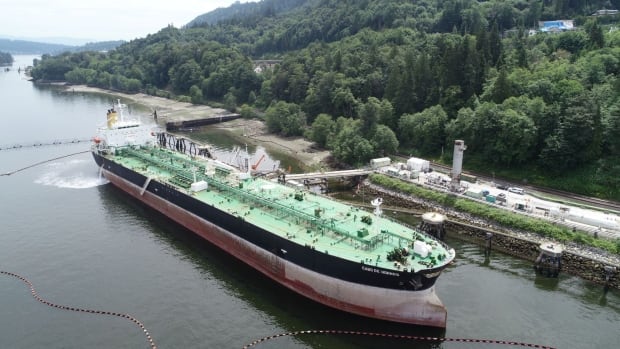 Cenovus Energy is sending a shipment of crude oil down through the Panama Canal as part of its first-ever transaction with New Brunswick’s Irving Oil.

The oil shipment will make the 11,900-kilometre journey to Irving’s refinery in Saint John by tanker ship, Cenovus announced in a social media post on Wednesday.

The news comes two months after Irving Oil, the operator of the country’s largest refinery, surprised the sector with its plans to begin receiving more crude from Western Canada by using tankers starting this summer.

Cenovus vice president Keith Chiasson said in a statement provided to CBC News that it’s a “one-off “shipment for now.

“But we believe this Canadian success story has the potential over time to create significant value for both companies and the entire country,” he said, adding Cenvous is pleased with the economics of the transaction.

Privately held Irving applied this spring to the Canadian Transportation Agency (CTA) to use foreign tankers in order to increase the amount of domestic crude it gets from offshore Newfoundland and Western Canada.

Iriving Oil’s application included a proposal for the tankers to transport oil from a terminal in Burnaby, B.C., through the Panama Canal and on to Irving Oil’s refinery in Saint John, N.B.

The company said at the beginning of May that it wanted to increase the mix of Canadian crude it uses, which at that time was in the range of 20 per cent.

Increasing the amount of Canadian oil that the refinery uses would displace the crude imports the company gets from around the world, but it wasn’t clear which shipments might be affected.

An official with the refinery said at the time that it uses a “significant” amount of oil from the United States.

The Alberta government has welcomed Irving Oil’s interest in using more Western Canadian crude, but has also said it was “unfortunate” it required complicated marine shipping routes rather than a pipeline, like the cancelled Energy East pipeline.

Chiasson said the transaction shows the ability of the two companies “to help drive Canada’s economy even during these unprecedented times of turbulence created by the COVID-19 pandemic and the resulting challenges for the energy industry.”