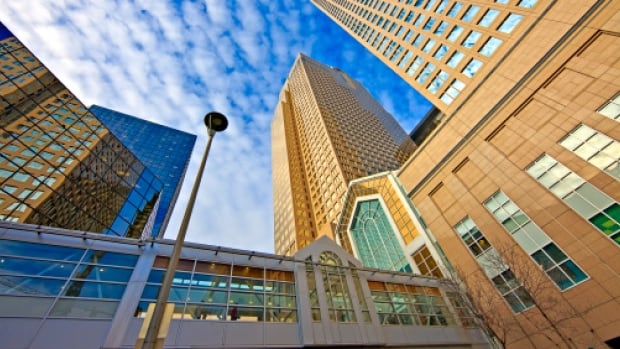 The office vacancy rate in downtown Calgary is sitting at just a notch below 27 per cent and is on track to reach an unprecedented 30 per cent within the next year to two years, according to a new market report released Monday.

“It now appears that Calgary’s downtown will cross into unseen territory for a modern, major office market in Canada within the next 12-24 months,” says the Avison Young Calgary Office Market Report for the fourth quarter of 2020.

The report says that because of the combined impact of Alberta’s economic downturn and the COVID-19 pandemic, the amount of space put back into the leasing market in 2020 was higher than anticipated.

In particular, it is expected that the recent merger of Husky with Cenovus will result in roughly 2,150 job losses — a 25 per cent reduction of the reformed company’s 8,600-person workforce, the report says.

Cuts of that magnitude could correlate to approximately 322,000 to 537,000 square feet of space no longer being required, given an average office density of between 150 to 250 square feet per employee.

‘This is new peak vacancy’

Avison Young notes that, before the merger, Husky occupied approximately 600,000 square feet in the north tower of Western Canadian Place in the west end of the downtown core.

“This is a new peak vacancy for Calgary’s downtown office market,” the report said.

Out of 170 office buildings currently tracked by Avison Young in downtown Calgary, four are completely empty.

The most significant of the four is at 801 Seventh Avenue S.W. — formerly known as the Nexen building — which emptied out when Nexen moved all of its employees to The Bow building last year.

An additional seven properties are more than 75 per cent vacant.

There are 16 properties in the core with more than 100,000 square feet of contiguous space up for lease. These blocks of space account for a quarter of the overall availability in the city’s downtown.

The report says the COVID-19 pandemic prompted many businesses to reassess their space requirements as employees were forced to work remotely.

“It is still unknown what the net result on tenant demand for space will be as a result of COVID-19 as we have seen a variety of approaches. There are companies permanently adopting work-from-home policies putting downward pressure on demand, while other companies are prioritizing work in the office and are being creative with how they use space for increased social distancing and/or meeting spaces,” the report said.

“It will take a few years for these decisions to fully play out in the market.”

The overall office vacancy rate in Calgary’s office market reached a record high 24.1 per cent in the fourth quarter of 2020.

There are 16 empty office buildings in the city, four of them in the downtown core, three in the Beltline and nine in the suburban areas.