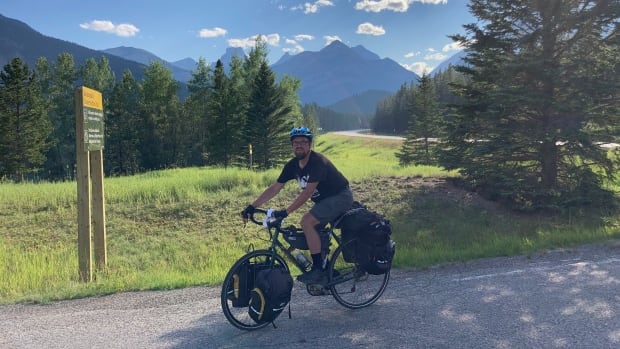 A Calgary man is biking more than 3,800 kilometres this month to visit 164 Alberta parks previously planned to be delisted by the provincial government.

As of July 15, he had made it more than 1,000 kilometres to the Highwood Provincial Recreation Area in Kananaskis, sharing photos and videos from each park along the way.

“I’m telling stories from these parks so that other people who may be following me can have a better understanding of what’s out here,” he told Daybreak Alberta.

“When they realize there are all of these amazing parks around the province, many of which they may not have been to themselves, I am hopeful [it] may inspire them in an idea for a future trip.”

Nichols hopes that by engaging with natural wild spaces throughout the province, people will be committed to conserving them.

Last March, the Alberta government decided to remove 164 of the province’s 473 parks from the system as a cost-saving measure, instead searching for third-party partners to take over their management.

After people rallied around defending the parks, the plan was reversed in December 2020, keeping the areas open — for now.

“When I was looking at these parks, it became all too easy to just see them as a list of names on a piece of paper,” said Nichols. “Your eyes glaze over and it becomes a very different kind of thing from actually coming out here and seeing for oneself.”

Last week, on a hot and smoky day, Nichols rode by the Oldman River, stopping to sit by a rock and soak his feet in the water.

From biking hundreds of miles outside of town to dangle your feet in a river, to having a picnic with friends in a park a few blocks away from home, there’s something about these spaces that resonate with people, he said.

“I don’t know that I’ve ever met anyone who doesn’t ‘get’ parks at all,” said Nichols.

“Everybody has a different understanding, an idea of what a park should be and the different things that they get out of it. But everybody can connect to a park in some way.”

Nichols will wend his way north, hitting dozens of parks that were slated for closure along the way, before ending his trip at the Strathcona Science Provincial Park in Edmonton at the end of July.

He is also raising money for the Alberta Wilderness Foundation, an organization that supports the conservation of wilderness areas and the completion of a protected areas network.