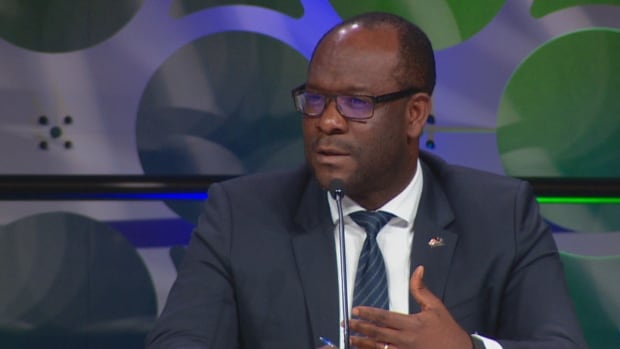 The Alberta government has introduced a bill that would allow cabinet ministers to speak publicly about issues that will be voted on in referendums.

The measure, which applies to all MLAs, is contained within Bill 68, the Election Statutes Amendment Act, 2021, which was introduced for first reading on Monday.

The Elections Act contains provisions that prohibit government advertising in the period leading up to provincial elections or referendum votes.

Justice Minister Kaycee Madu said the chief electoral officer and his department officials thought the legislation should be adjusted so that government ministers are able to express their opinions on the subjects of referendum questions.

“The way the law is written right now it is problematic for cabinet ministers to weigh in on referendum topics during referendums,” Madu said at a news conference.

“And I want to make sure that there is clarity, so that those grey areas could be clarified and that indeed that they have the same rights as every other MLA to do so.”

One or more referendum questions are expected this fall in tandem with the Oct. 18 municipal election. Under the Election Act, the prohibition on government advertising would start 60 days before the municipal vote. The prohibition for provincial elections would start on the day an election is called.

Premier Jason Kenney has said he wants Albertans to vote this fall on amending the equalization formula with the federal government to make it more favourable to Alberta.

The changes in Bill 68, if passed, would allow Kenney and his ministers to campaign openly in favour of gaining approval.

Bill 68 will allow the education minister to expand the eligibility for francophone school board candidates via an order-in-council. Currently rules limit candidacy to people with children attending francophone schools.

In its final report, the committee did not address potential issues caused by cabinet ministers speaking out about referendum questions.