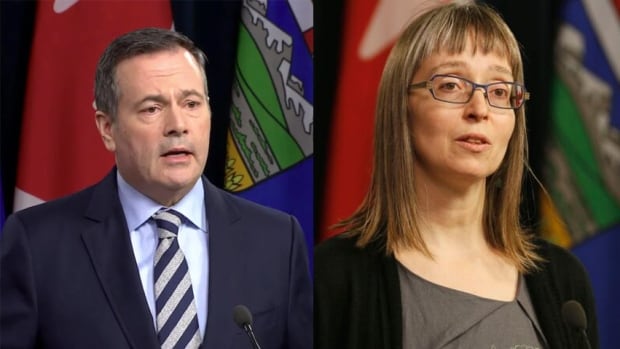 Alberta’s three-step reopening plan is based on the best science available and was built using evidence from jurisdictions around the world, says the province’s top public-health doctor.

“My team and I were fully engaged in the development of this plan,” Dr. Deena Hinshaw, Alberta’s chief medical officer of health, said Thursday at a news conference.

“I believe this plan is a prudent approach to reopening, with Stage 1 prioritizing the easing of low-risk outdoor activities, and only proceeding to the next stage as thresholds are met and the two-week window ends,” she said.

Hinshaw was joined by Premier Jason Kenney at the news conference held one day after the government announced its strategy that could see almost all public health restrictions lifted by July.

“This is Alberta’s response to the science of vaccines, of population protection,” Kenney said. “Because at the end of the day we cannot permanently rely on damaging public-health restrictions to protect our public health from this pandemic, especially since we now have the incredibly powerful and effective tools of vaccines.”

Alberta has taken cues from jurisdictions where there is protection from widespread uptake of vaccines as well as natural immunities, he said. “We have seen those jurisdictions be able to open up, get life back to normal, while continuing to observe significant declines in pressure from COVID, including new cases and hospitalizations.”

Alberta reported 513 new cases of COVID-19 on Thursday and one more death from the illness. Provincewide, there were 10,017 actives cases, with 538 patients being treated in hospitals, including 150 in ICU beds.

Hinshaw said Alberta’s first stage is significantly more cautious than plans announced in British Columbia and Saskatchewan. Her team also looked at the experience of Hungary, Israel, the U.K. and several U.S. states, as well as reviewing the reopening plans announced by other provinces.

“The public-health measures that have been needed over the past year are unprecedented in our lived experience, and that they come with significant public-health impacts as well. We have used these measures to save lives and protect the health-care system from being overwhelmed,” she said

“It is my opinion that we need to be as mindful of recovering from the impacts that the last year has had on Albertans’ mental health, well-being and determinants of health.”

Alberta’s reopening plan took into account current and future vaccine rates, vaccine effectiveness, overall community protection including immunity from those who recovered from the illness, and the capacity of the health-care system.

“All of these are essential parts of safely reopening and keeping cases down so we can stay open for good,” she said. “And they are all accounted for in Alberta’s open for summer plan.”

Each stage of the plan is tied to vaccination rates, with a two-week lag to ensure the doses have time to take effect. Reopening would be paused if hospitalization rates start to climb.

This first step, which goes fully into effect on June 1, requires that 50 per cent of eligible Albertans have received at least one dose of vaccine and that hospitalizations be below 800 and declining — thresholds that have already been met.

“One of the things that I’ve been talking about with my colleagues across the country is the challenge that we will collectively have as we transition into the next part of the pandemic,” Hinshaw said.

“COVID-19 is not going to be eliminated. And just like we have influenza season every year, like we have other risks of every activity that we undertake, there will continue to be some risks from COVID-19.”