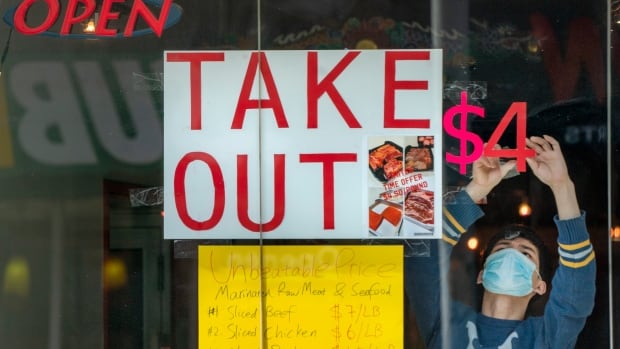 Alberta restaurants can reopen today for in-person dining as part of the province’s four-step plan to reopen the economy.

Restaurants had been closed to in-person dining after a resurgence of COVID-19 late last year sent case numbers soaring.

Premier Jason Kenney says reduced case numbers have made it possible to ease some restrictions, but he has also criticized some restaurants for ignoring public health orders by opening their doors prematurely.

Fitness training can also resume today but only for one-on-one workouts — individual workouts without a trainer are not permitted.

Sports and entertainment-related activities can resume in schools, and the province also said over the weekend that youth will be able to take part in lessons and practices for team-based minor sports and athletics, although games are still prohibited.

Indoor gatherings are still banned and outdoor get-togethers are capped at 10.

Some say re-opening is too risky

The plan has been criticized by some as too risky given the number of Albertans still in hospital with COVID-19 and the presence of new variants in the province.

The two variants, originating in the United Kingdom and South Africa, are exponentially more contagious than the original strain and, if left unchecked, could quickly swamp hospitals.

The Edmonton Zone Medical Staff Association wants the staged reopening shelved given the uncertainty of the variants.

The Opposition NDP says the province has put small- and medium-sized businesses in a no-win situation by not providing supports they need to stay closed and pushing them to move forward with risky reopenings.

Dr. Deena Hinshaw, chief medical officer of health, says the new strains are a concern, but adds more resources have been put in place to deal with them, including the capability of testing 300 positive cases a day for the variants.

As for the reopening, Hinshaw has said comparable provinces like British Columbia and Saskatchewan have similar per-capita COVID-19 rates with comparable economic measures.

There is a minimum three-week lag between stages to fully assess the impact on case rates. Both Hinshaw and Kenney have said if the reopening must be paused or rolled back, it will be.

The four-stage scenario is tied mainly to hospitalization rates. Stage 1 is moving ahead because there are fewer than 600 Albertans in hospital with COVID-19.

When fewer than 450 are hospitalized, there is to be a further easing of restrictions on hotels, retailers and conference centres. Right now, retailers are open at 15 per cent capacity.

If there are fewer than 300 COVID-19 patients in hospital, entertainment venues — including casinos, cinemas, theatres and art galleries — will be able to open and the 15 per cent capacity limit for faith-based services will be eased.

Large events such as indoor concerts, trade shows, and weddings are to get the green light when there are fewer than 150 hospital cases.