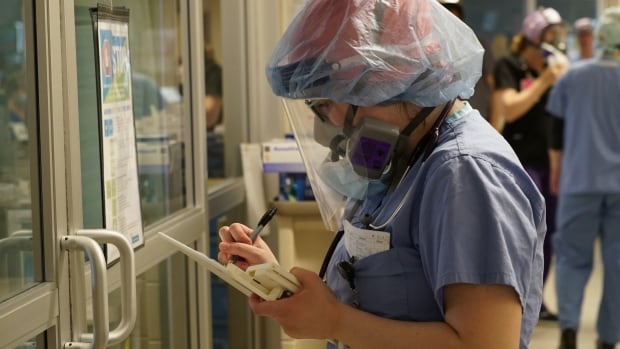 Friday’s number was down slightly from Thursday’s count of 2,048, which was the province’s peak for COVID-19 cases.

The number of active cases hit 21,828, an increase of 443 from the day before and another high mark for the pandemic in Alberta. During the second wave, active cases in the province peaked at 20,976 on Dec. 13.

Another 989 cases of highly contagious variants of concern were also reported. Variants now account for 61.6 per cent of all active cases in the province.

Alberta hospitals were treating 649 patients with COVID-19, up 17 from the day before. There were 152 patients in ICU beds, the highest number of COVID-19 patients in intensive care that province has seen.

Seven more deaths were recorded Friday bring the total number of deaths in Alberta due to COVID-19 to 2,082.

As the third wave of the COVID-19 pandemic set new records on Thursday, Alberta’s premier announced targeted public-health measures intended to slow the spread of the disease.

Junior and senior high schools in targeted communities will move to at-home learning and indoor fitness and sports are shut down.

Premier Jason Kenney warned Albertans if the curve continues to rise, more stringent measures, including curfews, might be necessary.

This how active cases in the province break down among health zones:

St. Albert hit 261 active cases on Friday, surpassing the benchmark of 250 to be added to the provincial hot spot list.

Mayor Cathy Heron said the city, which borders Edmonton to the northwest, was ready to apply the new restrictions.

“We’re ready to shut the pools down, shut the gyms down,” she said in an interview Friday morning, when the city was just five active cases shy of the threshold.

“I think there might be some sense of relief for the schools, because they have been bouncing like a ping pong ball between one class being at home, one class not, and struggling with finding resources.”

Heron praised the geographic approach to new restrictions but joined Edmonton Mayor Don Iveson in calling for the province to apply the rules across the entire region, rather than by distinct municipalities.

But south of Edmonton in Leduc, Mayor Bob Young was pleased indoor fitness and schools could remain open. He says only locals will be allowed to reserve space at recreation facilities in an effort to stop groups from nearby hot spots areas from circumventing the restrictions.

“We’re booking local groups and we’re not entertaining any outside groups,” Young said. “We certainly don’t want to do anything that encourages all sorts of travel in the region.”

All indoor fitness, already restricted to one-on-one training across the province, is prohibited in the targeted areas. All youth indoor sport, performance and recreation activities are also restricted in hot spot zones. Outside hot spots, youth groups can meet and train indoors under some capacity and physical distancing restrictions.

As of Friday, Leduc has 204 active cases, 46 below the provincial threshold.