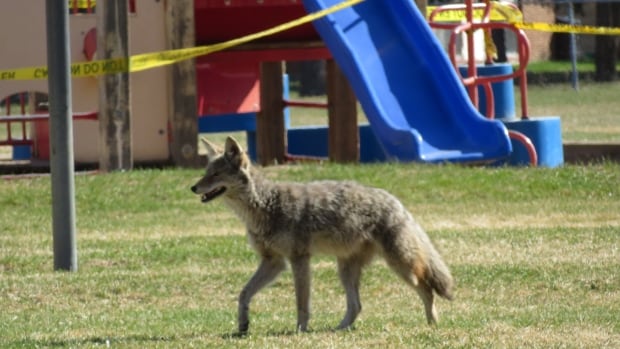 The Calgary community of Nolan Hill is dealing with a series of coyote attacks on humans — all believed to be caused by a lone, “unusually bold and aggressive” animal.

On Saturday, a woman was taken to hospital after being bitten outside of her home around 7:30 p.m, EMS said.

Gregory Harzler, chief of staff for Ward 2’s city councillor, said it’s believed the animal was behind two other attacks, including one against a woman and her child.

Harzler said keeping wildlife out of the community, located on the city’s northwest outskirts, has proven more difficult for city wildlife officers than one might think.

“One of the biggest challenges that we have in the area is we’re surrounded by so much open space, a lot of which is actually private property,” he said.

“So what [Councillor Joe Magliocca] has done is he has negotiated with the private landowners to pick up the cost to work with the city on tracking and dealing with the coyote.”

Harzler said city contractors have increased their presence in the neighbourhood, with multiple teams spending six to 10 hours each day working to “haze” the animal by teaching coyotes to associate humans with loud noises and other unpleasant experiences.

Community association president Mason Hender said he’s seen the coyote running on his street, neighbours have snapped photos of the animal eating rabbits and security camera footage of one of the attacks was “pretty scary.”

“We’d really like to see the City of Calgary take care of this coyote, either relocating it, or if push comes to shove, eliminating it. Really, we just want to make sure that everybody is safe and people can enjoy the community without fear,” he said.

Hender said the city posted signs in the area warning people of the animal and distributed pamphlets with safety advice.

“Despite unfortunate recent events involving an unusually bold and aggressive coyote in northwest Calgary, coyotes are usually not dangerous to people and play a valuable role in our ecosystem. We can live safely with them if we take the appropriate steps,” the city’s messaging reads.

A city spokesperson was unavailable to discuss the situation on Sunday as to what its next steps are.

When it comes to problem animals, the city conducts investigations using a conflict response guide. Possible outcomes could include an awareness campaign, closing parks and pathways, or potentially killing the animal.

Urban coyotes do have benefits, like helping control population of rodents and other wildlife and ensuring biodiversity.

The city’s website reminds people to clean up food on their property and not leave pets or small children unattended in order to avoid negative coyote encounters.

“The biggest thing is be aware of your surroundings,” said Harzler.

Last year, 311 received more than 1,500 reports of coyote sightings in the city.