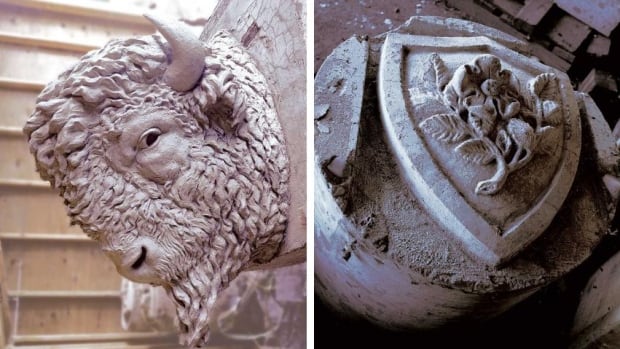 An auction of historic pieces of city architecture that had sat in storage for years exceeded the expectations of Heritage Calgary and proceeds will be used to help mark historic sites well into the future.

Sculpted concrete bison heads and crests from the Centre Street Bridge, as well as the painted tin sign and cornices from the Queens Hotel, were sold through Levis Art Auctions online. The auction closed Sunday.

The auction was intended to fund the heritage plaque program, which recognizes sites listed on the city’s historic resources inventory.

“Because so much money was raised, we’re actually going to be looking at creating an endowment fund for the plaque program so that it can be perpetual in terms of being able to offer plaques into the future,” Traptow said.

“We’re still figuring out the logistics of what exactly an endowment program will look like, but we’re hoping to be able to invest it and then be able to use that interest to fund the purchase of future plaques for any sites that are designated as municipal heritage resources.”

The auction items were taken over by the organization after a Freedom of Information request by CBC revealed that a number of heritage items had been sitting in city storage yards for decades.

Some of the items had been offered as donations to public institutions in the city, but after receiving no interest, they were put up for sale.

“It was a very exciting opportunity to take these items to auction and now being able to benefit our program,” Traptow said. “As we’ve seen [during the pandemic], people like to get out and walk around their neighbourhoods and learn about their neighbourhoods. And so if we’re able to provide these plaques where Calgarians and visitors are able to learn more … I think it’s a win-win.”

The bison heads were made by sculptor Al Stinson from the 1983 restoration of the bridge, while the crests were done by James L. Thompson in 1916. The Queens Hotel decorations likely date back to a hotel addition that was built in 1902. The hotel once stood at 802 Second Street S.E.

There were 11 buyers for the 27 items, meaning some bought multiple pieces.

Traptow said some of those who came out to view the items said they were considering the art for spaces like local restaurants or meeting rooms.

“It’s hard to say exactly where these items will end up, but I think they’ll be going to very good homes.”

Did you buy any of the auction items? Let us know what your plans are for the piece of art: sarah.rieger@cbc.ca